While it’s perhaps unusual to see a crocodile in an organisation’s logo – especially an entity as conservative as a central bank – the connection in our case is easily made.

The indigenous crocodile was already an important Jamaican symbol before BOJ’s logo was created and first unveiled to the Jamaican public via the Sunday Gleaner on 23 April 1961.

The crocodile had made his appearance 300 years earlier, having appeared in the nation’s Coat of Arms when the latter was granted to Jamaica in 1661. The Coat of Arms has seen several modifications over the years, but the crocodile (as crocodiles do) has survived and was there from the start.

Transferring the symbol to the logo of such an important national institution was then a logical step.

While he understands how the thought of substituting a crocodile for an ordinary guard dog might provoke some dark humour, designer Eddie Chai tells us that at the time designing a logo for the new central bank was very serious business.

The official description is, “…Bank of Jamaica’s emblem is a crocodile as it appears on the Jamaica Coat-of-arms, with a key in its mouth. The key is a symbol of security.”

Having a crocodile on our logo became rather fortuitous in October 2019, which is when we introduced the Croc O. Doyle character (a James Bond inspired not-so-secret agent with a licence to target inflation) as part of our inflation communication programme. 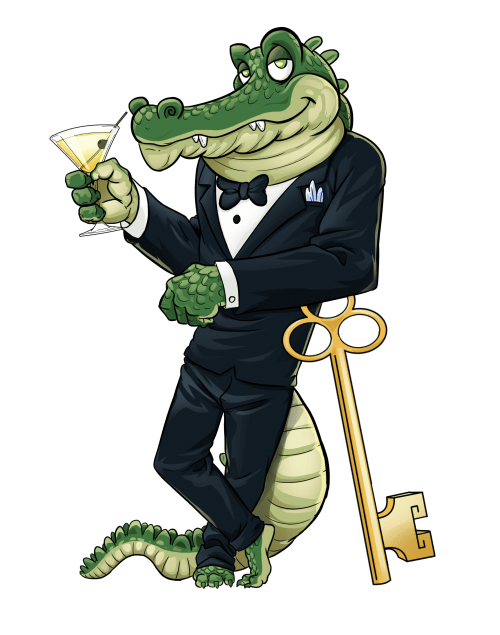 Having a crocodile spokesperson in addition to a crocodile on our logo then presented us with the welcome corporate responsibility opportunity to bring some attention to the real Jamaican crocodile, which happens to be an endangered species.

Twenty-one species of crocodiles inhabit global tropic and subtropical regions, but Jamaica is only known for one, the American Crocodile (Crocodylus acutus). The name doesn’t refer to the USA, but rather to the fact that crocodiles are indigenous to the entire Americas. Despite a famous place named Alligator Pond and several folk-tale references (“…Man who nuh dun cross rivah nuffi cuss alligator sey him mout’ long…”) using the names interchangeably, crocodiles are different from alligators and alligators are not native to Jamaica.