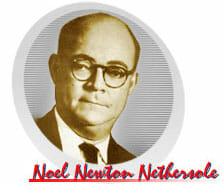 Noel Newton Nethersole, whose statue stands tall in front of the Bank of Jamaica building, was Minister of Finance in the years 1955 to 1959. A Rhodes scholar and solicitor of the Supreme Court of Jamaica, Mr. Nethersole was good-natured and tenacious of character, dispersing his energies “amongst many avocations”.
As Minister of Finance, his portfolio included public finance, financial planning, taxation, banking and currency and exchange control. He is credited with having a clear-sighted understanding of the real necessities of national independence.

During his term of office as Minister of Finance, Nethersole worked to achieve three goals:

Noel Nethersole’s portrait appeared on the $20 note which circulated between  1976 and 2000.

In 1960, Mr. Vernon Arnett, in speaking on the bill dealing with the creation of the Central Bank, could say this of Mr. Nethersole:
“It had long been his profound conclusion that the organization of the financial institutions of the country were an indispensable part of our economic development and that the development of these institutions would give reality to our political status and enable Jamaica to press forward with its economic progress in an orderly and coherent manner.”