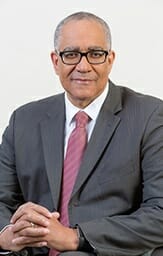 Born in Kingston, Jamaica in 1959, Mr. Wynter graduated from the London School of Economics and Political Science (LSE) in 1981 with a BSc (Economics) honours degree. He received the Graduate Diploma in Law from The City University, London and was called to the Bar of England and Wales in 1983 after completing the professional qualifying examinations at the Inns of Court School of Law, London. He was enrolled as an attorney in the Supreme Court of Judicature, Jamaica in 1990. Mr. Wynter is also the holder of a masters degree specialising in international economics from Columbia University School of International and Public Affairs, New York, which he received in 1985.

Before returning to Jamaica in 1988, Mr. Wynter worked with Chase Investment Bank and Schroder Wertheim International Company, both in New Y